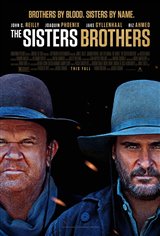 In 1851, gunslinger brothers Eli (John C. Reilly) and Charlie (Joaquin Phoenix) Sisters work for a man they refer to as The Commodore, who hires them as assassins. He also hires John Morris (Jake Gyllenhaal) as a lookout, to locate persons of interest to him. Morris is asked to find Hermann Kermit Warm (Riz Ahmed), who is traveling to California to prospect for gold.

Slight of stature but intelligent, Warm has a chemical formula he's come up with that will show where gold is, making it much easier to find. The Commodore wants the men to get the specifics of the solution so he can use it himself, at which point the Sisters brothers are supposed to kill Warm.

However, Morris doesn't stick to the plan, and Eli has his share of troubles keeping his violent, alcoholic younger brother in line. The Sisters brothers run into a variety of problems along the way, including a bear who attacks Eli's horse and a corrupt woman named Mayfield (Rebecca Root), who has an entire town under her thumb.

Based on the novel by Patrick Dewitt.