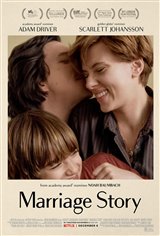 New York theater director Charlie (Adam Driver) and actress Nicole (Scarlett Johansson) are in the midst of a divorce. For years, Nicole, who was once a successful Hollywood actress, has wanted to return to Los Angeles, but Charlie has no interest in moving.

When she relocates with their eight-year-old son, Henry (Azhy Robertson), things get ugly between the two spouses. Charlie has to fly back and forth to see Henry, while their legal teams drive wedges between the two, who at first, began their separation amicably.