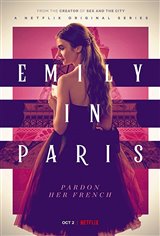 When her colleague suddenly can't make it, Chicago marketing executive Emily Cooper (Lily Collins) is given the dream job of working with a marketing firm in Paris, even though she doesn't speak French. Thrilled by the prospect and eager to begin working, she soon discovers that her new co-workers aren't impressed by her lack of French and find her enthusiasm off-putting. She quickly discovers that the workplace is very different from anything she experienced in the States.

However, she meets Gabriel (Lucas Bravo), a chef who lives in her apartment building who helps her find her way, as well as a new friend, Mindy Chen (Ashley Park), who's hiding out in Paris as a nanny following a disastrous TV talent show appearance and Gabriel's very sweet girlfriend Camille (Camille Razat), who also becomes Emily's friend.