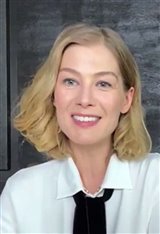 The only child of musician parents, London-born Rosamund Pike was encouraged to embrace the arts at an early age. After learning to play the piano and the cello, Pike began acting at 16 when she was accepted into The National Youth Theatre. Her first lead role came at 18 when she was cast in a production of Romeo and Juliet. She continued her education at Wadham College where she graduated with a degree in English literature. Rosamund continued acting on stage, appearing in lead roles in many... See All