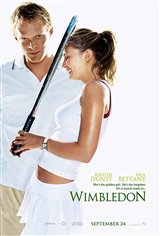 Peter Colt (Paul Bettany) is an unlucky guy, scoring "love" both professionally and personally. Seeded near the bottom of the world tennis ranks, he manages to score a wild card, allowing him to play in the prestigious Wimbledon tournament. There, he meets and falls in love with American tennis star Lizzie Bradbury (Kirsten Dunst).

Fueled by a mixture of his newfound luck, love and on-court prowess, Peter works his way up the ranks of the tournament players and actually stands a chance of fulfilling his lifelong dream of winning the men's singles title--if his luck can just hold out.