William Shakespeare's The Merchant of Venice 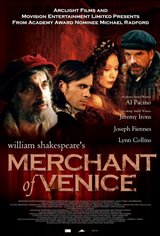 Antonio's best friend Bassanio (Joseph Fiennes) needs money to court the lovely heiress Portia (Lynn Collins), with whom he has fallen in love. Antonio, whose money is tied up in trade ships that are away at sea, goes to Shylock to get three thousand ducats for Bassanio.

Shylock agrees to lend them the money interest free, with the stipulation that if the loan is not paid back on time, he'll be entitled to a pound of Antonio's own flesh.