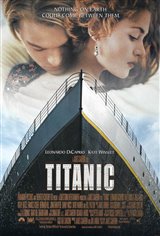 On the night of April 14, 1912 just after 11:40 p.m., the RMS Titanic, which had been thought by many to be unsinkable, hit an iceberg. Five of 16 watertight compartments began to fill with water, and continued to rush into the ship until two and a half hours later, when the stern of the enormous ship tilted straight up into the air. The Titanic sank beneath the surface just before 2:30 a.m. on April 15, 2012.

The passenger list included a number of the world's wealthiest people, but also hundreds of immigrants hoping for a new life in North America.

The height equivalent of an 11-story building, the ship had 10 decks. Passengers were separated into first, second and third (or steerage) class. The first class passengers had the uppermost decks and their accommodations included spacious cabins, a gym, a salt water pool, squash court, barber shop, library and Turkish bath, as well as several lavish dining rooms.

According to the British Wreck Commissioner's Inquiry, there were 711 survivors, including 57 children. Just one first class child died—two-year-old Loraine Hudson. It was later reported by a survivor that Loraine's mother was on a lifeboat but climbed out with her daughter to search for her husband and son on the ship. All three perished, but Loraine's baby brother, Trevor, whose nurse had taken him on a lifeboat, survived.

The ship was equipped with 16 wooden lifeboats capable of holding 65 people each and four collapsible lifeboats that could hold 47 each. Not enough to save all the passengers, but enough for all the women and children and some of the men. Because in the panic they weren't filled to capacity (the first held only 27—the rest held anywhere from 12 to 57 people) and two of the collapsible ones fell to the ocean before anyone could climb aboard, less lives were saved than could have been. Among the dead were an estimated 55 children from third class—all the second class children lived.

Although the casualties can't be pinpointed to an exact number due to a variety of factors, including possible stowaways, passengers who registered under aliases and others who cancelled at the last minute, it’s believed approximately 1514 men, women and children died in total. If the lifeboats had been filled, almost 500 more lives could have been saved.

Only 25 per cent of third class passengers—178—were saved. The 1997 movie showed locked gates barring steerage passengers from getting to the lifeboats. There's been much debate about whether these were locked and whether this was the reason why there were so many third class victims. Some argue the passengers were not trapped below, and say the reason for the high percentage of deaths was that many didn't speak English and therefore weren't aware of what was happening. However, several steerage passengers who survived testified that they had seen locked gates.

During a hearing before the United States Senate, British Royal Navy veteran Edward John Buley testified that before the last lifeboat was lowered to the water, there was a check made to see if any women were left onboard. A handful who didn’t realize what was going on or who didn't like the idea of being in a lifeboat were thrown into the boat as it was being lowered. One of these women was Anna Sophia Turja.

Anna Sophia was 18 when she was a steerage passenger on the Titanic. She described the accommodations as beautiful, despite having to share her room, which had bunk beds, with three strangers. Anna survived because her roommate's brother came to the door, told them to put on their life jackets and to follow him. They headed for the upper decks, ignoring a crew member who ordered them to stay below. After they'd passed through, she noticed the gates were chained to keep other steerage passengers down below. She stopped to listen to the musicians and stayed there until she was thrown into a lifeboat.

Survivor Annie Kelly said crew members would not let steerage passengers through to the upper decks. They were told to go back down; that there was no danger. However, 21-year-old steerage survivor Daniel Buckley says as water was entering the room he shared with three other young men, two crewmen came around to tell the steerage passengers to get up on deck before they drowned. He reported that although other crewmen tried to keep the steerage passengers below, one of the passengers broke the lock on the gate, enabling third class passengers to escape. A first class passenger who had two lifejackets handed one to Daniel. The young man boarded Lifeboat #13, one of the last to be lowered, with other men, but two officers came and ordered all the men out, firing shots in the air, though six crewmen were allowed stayed in the boat. When Daniel began crying, a first class woman threw her shawl over him, successfully hiding him from the officers.

Two young sisters from Ireland—Catherine and Margaret Murphy—tried to get to the upper decks and were joined at the locked gates by two other third class women. James Farrell, also a third class passenger, shouted at a crewman to let the girls through and after a slight hesitation, the man complied, opening the gate for the women but leaving Farrell below, locking the gates once the women had passed through. The four women made it onto Lifeboat #16, the third from the second class deck to be lowered. It was less than half full, holding 30 survivors, including six crew, one third class child, 19 third class women and one third class man, as well as three second class women. Farrell did not make it off the ship. The people who had managed to get into lifeboats were rescued in the early morning hours of April 15, 2012 by the RMS Carpathia, which had picked up the Titanic's distress call before it sank.

First class survivor Margaret Brown, who had insisted that the lifeboat she was in should return to look for survivors in the water as the Titanic was going down, suggested on board the Carpathia that a fund should be started for the steerage survivors who had lost everything. She raised $10,000 and continued to work for years on their behalf, becoming the chair of the Titanic Survivor’s Committee. Her story was fictionalized and made into a Broadway musical titled The Unsinkable Molly Brown, later turned into a 1964 movie starring Debbie Reynolds.

On May 31, 2009, the last living survivor, Millvina Dean, who was nine weeks old when the catastrophe occurred, died at the age of 97 in England. Her cremated remains were scattered several months later from the docks in Southampton where the Titanic set sail. ~Alexandra Heilbron