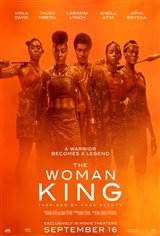 In the 1800s, the Agojie are an all-female unit of warriors who protect the African Kingdom of Dahomey with skills and a fierceness unlike anything the world has ever seen.

When the kingdom is threatened by colonizers, Agojie General Nanisca (Viola Davis) must defend their land and way of life. She begins to train a new generation of fierce warriors for the historic upcoming battle. Nawi (Thuso Mbedu) is a new recruit who begins her training to be a part of the legendary group of warriors.