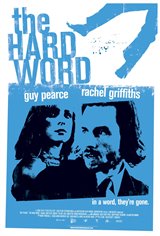 9 votes and 1 Reviews | Write a Review

Watch Trailer
Three prisoners are about to be released on bail -- Dale (Pearce), Mal (Richardson) and Shane (Edgerton). Meet the Twentyman brothers. Hard experience and an unspoken bond of family have made them masters of their craft -- armed robbery. It's a job and they do it because they're good at it. Their only rule is, no one gets hurt.

Keeping the wheels of crime turning is their long-time criminal lawyer, Frank Malone (Taylor), who combines flashy arrogance with a complete disregard for the proper process of the law. Frank's network of contacts enables him to play the brothers and the system to perfection. But success has clearly gone to his head when he starts screwing Dale's wife, Carol (Griffiths). Dazzled by her physical attractiveness, Frank has severely underestimated the brain underneath the blonde. Carol is one of life's greatest operators and she is determined to get what's hers.

The brothers are out on bail, only long enough to do one job before they are back behind bars because of a problem with the 'paperwork'. Of course Frank will get them out but there's a catch... they must do a really big job if it is to be their last. Dale's festering suspicion about Frank's motives, and a bout with food poisoning, create an impossible situation leading up to a multi-million dollar heist. The job is to take place in Melbourne. Frank has lined up some local criminals to work with them, to the displeasure of the brothers. Up against the wall and with no way out, the boys proceed with the ambitious robbery, despite some dark misgivings. When it all goes wrong, the brothers discover the full extent of Frank's treachery as they make a desperate escape from the surrounding havoc. Breaking free of Melbourne in a hijacked car, the brothers have plenty of time to think on the long road back to Sydney. Although they have the money, they know Frank will not be far behind. And he isn't. And neither is Carol.