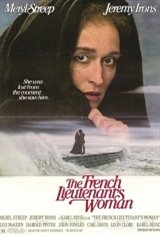 John Fowles' original novel The French Lieutenant's Woman was distinguished by a literary technique that involved telling a story of Victorian sexual and social oppression within the bounds of a 1970s viewpoint. How does one convey this time-frame dichotomy on film?

The decision made by director Karel Reisz and Harold Pinter was to frame Fowles' basic plot within a modern context of their own making.

While we watch as Sarah (Meryl Streep), a 19th-century Englishwoman ruined by an affair with a French lieutenant, enters into another disastrous relationship with principled young Charles (Jeremy Irons), we are constantly made aware that what we're seeing is only a film.

This is done by surrounding the story with a modern narrative, focusing on a movie production company which is on location--filming The French Lieutenant's Woman. Meryl Streep doubles in the role of Sara and the American actress who plays her, while Jeremy Irons essays the dual role of Charles and the handsome Briton playing Charles.