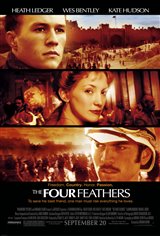 Watch Trailer
British officer Harry Feversham (Ledger) resigns his post right before a battle against Egyptian rebels in 1898 Sudan. His friends and fiancée (Hudson) send him four white feathers as a symbol of what they perceive to be his cowardice.

When Feversham discovers his best friend (Bentley) and former regiment are in trouble, he disguises himself as an Arab and sets out on a perilous journey to the Sudan to redeem his honor by saving the lives of those who branded him a coward.

Based on the novel by A.E.W. Mason.