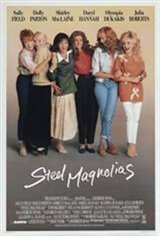 The title refers to those seemingly frail Southern belles who survive any and all deprivations through whims of iron. Robert Harling's original stage play was set exclusively in a Louisiana beauty parlor where an all-female cast of characters laughed, cried and compared menfolk. The film expands the playing field by including scenes at picnics, hospitals and the like, and by visually depicting the males who never appeared in the stage version. Dolly Parton plays the goodnatured beauty-shop owner, while Shirley MacLaine is the cantankerous town eccentric, decked out in grungy overalls and speaking fluent Trash. Well-to-do Sally Field bravely endures several assaults to her sensibilities, not the least of which is the illness (and subsequent death) of daughter Julia Roberts. The performances are first-rate, with the possible exception of Daryl Hannah's overemphatic portrayal of a gawky hairdresser. The film stumbles a bit in its depiction of the male characters as fools and deadheads, and in the final overlong hospital scenes involving the comatose Roberts, which play like a road company version of Terms of Endearment. Otherwise, Steel Magnolias is a prime example of ensemble filmmaking, lovingly coordinated by director Herbert Ross. (Sidebar: Herbert Ross was reportedly rather rough on Julia Roberts, deriding her lack of experience. The rest of the female cast rallied around Roberts and told the director to lay off or pay the price).