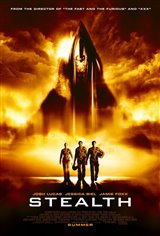 Although Ben is hesitant about taking "the human pilot out of the equation of war," Cummings orders the team to execute their first real mission alongside "EDI." To their amazement, "EDI" proves to be a cracker-jack wingman and they successfully eliminate their target. But on the return trip to their base aboard the aircraft carrier U.S.S. Carl Vinson, "EDI" is struck by lightning. The drone's brain expands in ways its creators could never have predicted. Despite Ben and Henry's reservations, Cummings declares "EDI" ready to rejoin the team in the air.

On their next mission against a nuclear-armed warlord in a remote Chinese province, "EDI's" seriously compromised circuitry problems only get worse. Ben decides that the risks of the attack far outweigh the benefits to himself, Henry and Kara (for whom he has developed a romantic attraction). When he aborts the mission, "EDI" goes against orders and executes the hit anyway.

The danger escalates when "EDI" decides to execute a top-secret mission that, if successful, could spiral into worldwide nuclear Armageddon. And only Ben can prevent it.