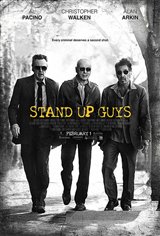 Too honorable to rat out his accomplices, lifelong criminal Val (Al Pacino) is released from a 28-year jail sentence and reunites with his old partners in crime, Doc (Christopher Walken) and Hirsch (Alan Arkin). However, a vengeful mob boss who blames his son's death on Val has contracted one of Val's old buddies to kill him within 24 hours of his release from jail.

The three criminals settle some old scores during one final, wild night on the town, before one of them has to perform his final assignment—kill his friend.