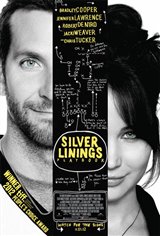 After suffering for years with an undiagnosed bipolar disorder, high school teacher Pat (Bradley Cooper) is sent to a psychiatric facility following a violent incident sparked by him finding his wife having sex with a co-worker.

Eight months later he's released into his parents' (Robert De Niro, Jacki Weaver) care. He's hoping to win back his wife, despite the fact that she's put a restraining order on him.

Still given to odd rants and inappropriate comments, Pat meets Tiffany (Jennifer Lawrence), a young widow who had a breakdown following the death of her husband. She offers to help him win back his wife if he'll enter a dance competition with her.

The role of Pat was originally supposed to be played by Mark Wahlberg but it ultimately ended up going to Bradley Cooper. There was also a string of actresses that were reportedly considered for the part of Tiffany including Rachel McAdams, Olivia Wilde, Elizabeth Banks, Blake Lively, Rooney Mara and Andrea Riseborough.