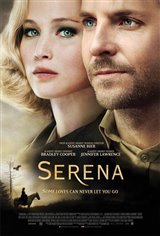 In 1929, just as the Depression has hit, newlywed couple George (Bradley Cooper) and Serena Pemberton (Jennifer Lawrence), move from Boston to North Carolina to build a timber empire. Although Serena proves herself to be an important part of their success, overseeing crews and handling every bit of trouble that comes upon them, when Serena discovers she's unable to bear children, it sets her on a path of destruction.

Serena plots the murder of George's illegitimate son from an affair he had before they were married. Their marriage begins to unravel as they attempt to keep their land from being taken by the government.

Based on the New York Times best-selling novel by Ron Rash.