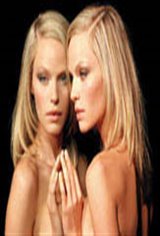 Watch Trailer
Viktor Taransky (Pacino) is a down and out Academy Award®-nominated director who just lost his last shot at a comeback when his temperamental flesh and blood actress walked off his movie Sunrise, Sunset.. And when she left, so did Taransky's self-respect. Fired by his ex-wife and studio head Elaine Christian (Keener), Taransky just lost any hope of recapturing his former life with Elaine and their daughter Lainey (Wood). But then computer genius Hank Aleno (Koteas) shows up...

Although Hank is not long for this world, he is certain his creation will be in the right hands -- Taransky's. Although Taransky initially rebuffs Hank's insane proposal, Hank has the last say. He bequeaths the software to Taransky that will change his life forever: Simulation One. Just a few key strokes and an overnight sensation is born: S1MØNE. Suddenly, Taransky has a taste of the success he always craved and the world's most beloved star under his thumb.

But an intrepid tabloid reporter, Max Sayer (Vince), is doing his best to challenge that. And his pursuit becomes a little sweeter when Taransky's immaculate matrix starts to take on a life of her own.

In a twist of comedic consequences the omniscient Taransky never anticipated, the creation.. or creature... is about to show the creator the meaning of "Eternity Forever." Suddenly, real never looked so good.