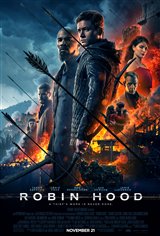 A war-hardened hooded Crusader (Taron Egerton) and his Moorish commander Little John (Jamie Foxx) mount an audacious revolt against the Sheriff of Nottingham (Ben Mendelsohn) and the corrupt English crown in an effort to help the struggling and downtrodden peasants.

No one knows who the hooded man known as Robin Hood is, but his action gives hope to the commoners, even as a bounty is placed on his head.