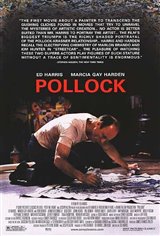 Watch Trailer
Set during the 15 or so years from Pollock's (Harris) rise in the art world to his death. During his rise, his alcoholism and his wife, Lee Krasner (Harden) battle over him for control. Eventually, he settles into the Action Painting he's best-known for, becoming unbelievably famous overnight. His success continues until he loses control again.