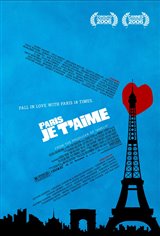 Watch Trailer
In Paris, je t'aime, celebrated directors from around the world, including the Coen Brothers, Gus Van Sant, Gurinder Chadha, Wes Craven, Walter Salles, Alexander Payne and Olivier Assayas, have come together to portray Paris in a way never before imagined.

Made by a team of contributors as cosmopolitan as the city itself, this portrait of the city is as diverse as its creators' backgrounds and nationalities. With each director telling the story of an unusual encounter in one of the city's neighborhoods, the vignettes go beyond the 'postcard' view of Paris to portray aspects of the city rarely seen on the big screen.

Racial tensions stand next to paranoid visions of the city seen from the perspective of an American tourist. A young foreign worker moves from her own domestic situation into her employer's bourgeois environs. An American starlet finds escape as she is shooting a movie. A man is torn between his wife and his lover. A young man working in a print shop sees and desires another young man. A father grapples with his complex relationship with his daughter. A couple tries to add spice to their sex life. These are but a few of the witty and serendipitous narratives that make up Paris, je t'aime.