On the Come Up 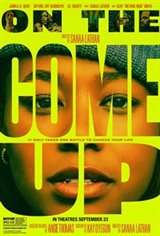 Bri (Jamila Grey), a 16-year-old gifted rapper, makes an attempt to take the battle rap scene by storm in order to help out with the family finances and also to uphold her local hip hop legend father's legacy, after his life and career were cut short by gang violence.

She's managed at first by her Aunt Pooh (Da'Vine Joy Randolph), but when her father's old friend, who now successfully manages his son's career, shows her how quickly he could make her a star, she decides to drop her aunt and go where the money is. But when her first hit song goes viral for all the wrong reasons, she finds herself torn between the authenticity that got her this far and the false persona that the industry wants to impose upon her.