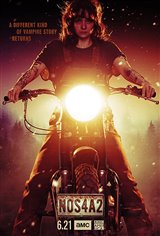 Charlie Manx (Zachary Quinto), a seductive immortal who feeds on the souls of children, has his world threatened when Victoria "Vic" McQueen (Ashleigh Cummings ), a young woman in New England, discovers she has a a supernatural ability to track the villain.

In the second season, Vic remains more determined than ever to destroy Charlie. Charlie, having faced his own mortality, emerges desperate for revenge against Vic. This time, he sets his sights on the person who means most to Vic—her eight-year-old son Wayne (Jason David).

Based on the novel by Joe Hill.