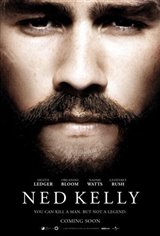 Watch Trailer
After a brutal childhood at the hands of the police and the subsequent death of his father, 16-year-old Ned Kelly is imprisoned on the trumped up charge of stealing a horse. Emerging four years later, Ned is hardened but vows to go straight. He works as a farmhand on the estate of an English landowner, while making money on the side as a boxer. But the system is prejudiced against first-generation Irish immigrants, to the point that when a police officer assaults Ned's sister Kate, it is Ned and his mother who are charged with attempted murder.

Forced to go on the run, Ned is determined to avenge his family and strike back at a system that wrongs them all. He forms a gang with his young brother, Dan, and two friends, Steve Hart and Joe Byrne. Together, they cut a trail through the Outback, holding up towns and robbing banks while giving the police the run-around. Ned's reputation as an invincible outlaw grows. But while a folk hero to the masses; to the establishment, Ned Kelly is the most wanted man in Australia. When the authorities bring in the formidable Superintendent Hare and an army of police to catch Ned Kelly, Ned plans an extraordinary showdown at the Inn at Glenrowan. It is an event that will cement his status as the legendary revolutionary hero of the Australian underclass forever.