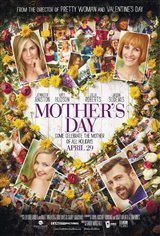 Sandy (Jennifer Aniston), a divorced mother of two boys, gets along with her ex-husband. When he suddenly drops a bombshell, telling her he married a much younger woman without telling anyone, she's dismayed. Especially when the boys seem to like the new wife.

Jesse (Kate Hudson) and her sister Gabi (Sarah Chalke) try to keep their racist parents in the dark about their relationships. Gabi is married to a woman and Jesse is married to a man of Indian origin. Whenever her parents Skype, Jesse hides her family portrait of her husband and son.

Miranda (Julia Roberts) is a successful entrepreneur who has never married and claims to be childless. That changes when a young woman shows up claiming to be her daughter.

Bradley (Jason Sudeikis) is a widower struggling to raise two daughters, one of whom is now a teen. The lives of all of these characters connect in this hilarious comedy that leads up to Mother's Day.