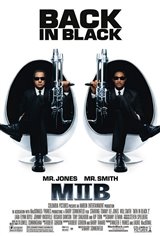 Four years after Agents Kay (Jones) and Jay (Smith) averted an intergalactic disaster of epic proportions, Jay uncovers a diabolical plot masterminded by Serleena (Boyle), an evil Kylothian who disguises herself as a sexy lingerie model. When Serleena takes the entire MIB building hostage, there is only one person Jay can turn to -- his former MIB partner who is now a drone in another large government office, the U.S. postal service, and prefers simple pleasures like his wife's cookies over standoffs with mammoth alien insects.

It's a race against the clock as Jay must convince Kay -- who not only has absolutely no memory of his time spent with the Men in Black, but is also the only living person left with the expertise to save the galaxy -- to reunite with the MIB before the Earth is destroyed.