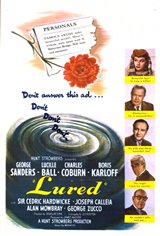 Lucille Ball is an American taxi-dancer living in London whose roommate has disappeared. The missing girl had left to answer a job offer in the personal column of the Times...just like several other women who've vanished without a trace. Scotland Yard detective George Zucco suggests that Ball answer the personals herself in hopes trapping the killer.

She crosses the paths of several eccentrics, including deranged artist Boris Karloff, who for a brief time is the prime suspect. The actual culprit, a sex murderer, is the least likely and most helpful of Ball's contacts -- a fact that she learns almost too late.