Indiana Jones and the Dial of Destiny 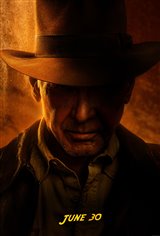 In 1969, American archaeologist and adventurer Indiana Jones (Harrison Ford) is living against the backdrop of the space race — but the American effort to beat the Russians to the moon brings with it some uncomfortable truths for Indy. He's uneasy over the fact that the U.S. government has hired former Nazis to run the moon-landing program. His goddaughter, Helena (Phoebe Waller-Bridge), accompanies him on his current journey to obtain a mystical relic.

Meanwhile, Jürgen Voller (Mads Mikkleson), a NASA member and one of the aforementioned former Nazis, is involved with the moon-landing program. He wishes to correct some of the mistakes of the past as he sees fit, by getting the same mystical relic that Indie is after.