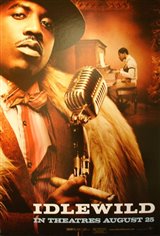 Watch Trailer
In the 1930s American South, there was one spot that served as a haven—a place of prayer for the weary, joy for the hopeful and music for the masses. All were welcome to come and find the Lord as they walked into church on Sunday mornings. When the good and righteous built these houses of worship, however, they did ask guests to leave a few things at the door, namely: cussing, liquor, fast women, gambling and guns. And that was the part of the sermon to which Rooster just didn’t pay attention. In his nightclub called “Church,” there was only one story to tell…one in the key of cool.

In Idlewild, players gather nightly at Church. Soft-spoken and reserved mortician Percival (André Benjamin) sees playing piano at the nightclub as welcome respite from the doldrums of working in his overbearing father’s (Ben Vereen) funeral home. One night in Church, Percival meets the latest celebrity to tour the South, the ethereal Angel (Paula Patton). Percival falls head over heels in love with the ingénue and is faced with a choice: stay or leave his oppressive father behind and pursue his dreams of becoming a song-and-dance man in the big cities of which he’s only dreamed.

Church’s manager, Rooster (Antwan A. Patton), is the son of a moonshine runner, a man who has grown into his flashy clothes and role as a wheeler-dealer—juggling both his suspicious wife, Zora (Malinda Williams), and a cast of characters who make their money off the place’s illegal dealings. From the club’s blustering owner, “Sunshine” Ace (Faizon Love), to the swop dancers, showgirls, musicians, fire-eaters and divas who light up the stage—including hard-drinking, sultry singer Taffy (Macy Gray)—Rooster makes sure the show goes on nightly and Church’s customers get just the entertainment they came to find.

But Rooster’s problems multiply after he witnesses a shooting that places Trumpy (Terrence Howard)—one of the mob men—into control of the influx of liquor into his juke joint. While on the run from the mob, the good-hearted scoundrel realizes his life of petty crime is taking him nowhere and must now fight his way back to his family while his best friend Percy tries to escape the hold Idlewild has on him…and start a new life performing in a faraway city.