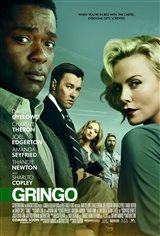 Watch Trailer
Harold Soyinka (David Oyelowo) is having financial problems. When his company sends him to Mexico to deliver a "weed pill" that they've invented, he jumps at the chance to travel.

However, once there, he's kidnapped and when he calls his business colleagues back home, they are less than sympathetic. It seems that they sold a product to the local Mexican cartel, but then cut them off.

Harold battles to survive his increasingly dangerous situation with little help from the company that put him in the position in the first place.