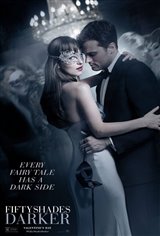 After leaving Christian (Jamie Dornan), Ana (Dakota Johnson) starts a new job as personal assistant to the editor, Jack Hyde (Eric Johnson), at a publishing company. However, she finds herself having to fend off advances from her new boss.

Christian purchases the publishing company where Ana is working and stops her from going on an overnight business trip with Jack, because Christian knows Jack's history of sexually harassing his assistants. Wanting Ana back in his life, Christian convinces her to give him another chance. After agreeing to her demands for a new arrangement, they begin to build trust and find stability.

However, when Ana meets Elena (Kim Basinger), the woman who seduced Christian when he was 15 years old, she's unhappy that Christian continues to be friends with her. When Elena realizes that Christian has romantic feelings for Ana, she tries to throw a wrench in the young couple's relationship.