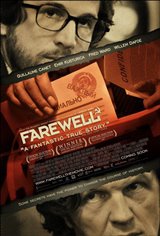 Moscow, 1981. Convinced that the Soviet regime is adrift, Sergei Grigoriev, a colonel with the KGB, decides to betray his country. He provides sensitive information to the DST through Pierre Froment, a French engineer in Moscow.

With no experience in espionage, Peter, initially reluctant, is caught in the game, hiding in his wife and children to meet with Grigoriev, whose code name is Farewell. With Farewell, all KGB agents abroad are exposed and expelled. No longer afraid of being spied on, Ronald Reagan, the President of the United States, tried the bluff of the "Star Wars" to bring the USSR to its knees.