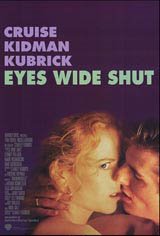 Watch Trailer   Movie Times
Hey, doesn't really matter what it's about. It's enough to know that it's a Kubrick film with Golden Boy Cruise and to-die-for wife Kidman. But for those who need to know, the film is a tale of sexual obsession as a married couple (Cruise and Kidman) -- he's a psychologist, she's a museum curator -- have extramarital matters on their minds. Kinky sex and drug abuse are the order of the day as the duo battle their own demons.

It's legendary director Stanley Kubrick's last film as he died of a heart attack shortly after shooting was complete.