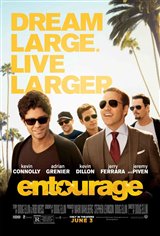 Vincent Chase (Adrian Grenier) and the boys are back. Following the conclusion of the hit TV series in 2011, we catch up with Eric (Kevin Connolly), Turtle (Jerry Ferrara) and Johnny Drama (Kevin Dillon). Following a failed marriage Vince decides that he wants to star in a new blockbuster, and in addition to that he tells newly appointed studio head Ari Gold (Jeremy Piven) he wants to make his directorial debut.

When the movie goes over budget, Ari must secure more money from his backers, Larsen McCredle (Billy Bob Thornton) and his son, Travis McCredle (Haley Joel Osment). The problem? They don't want to invest anymore without first seeing the movie. After viewing the rough cut, concerns are raised by Travis and Ari needs to find a way to get the movie made.