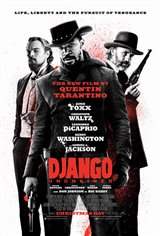 Set in the deep South two years before the Civil War, Django Unchained tells the story of a slave (Jamie Foxx) who is rescued by Dr. King Schultz (Christoph Waltz), a man working as an undercover bounty hunter.

Upon being freed and having mastered vital hunting skills, Django teams up with his own rescuer to accomplish a a daunting task: to find and rescue Django's wife Broomhilda (Kerry Washington), who had been captured by a cruel plantation owner (Leonardo DiCaprio).