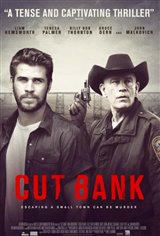 8 votes and 5 Reviews | Write a Review

When small-town mechanic Dwayne McLaren (Liam Hemsworth) videos the murder of a postal employee, questions arise as to how he happened to be filming just as it occurred, especially when he stands to get a $100,000 reward, with which he plans to get out of the town of Cut Bank and move to the big city.

Strangely, a body is never found, and this prompts the local sheriff (John Malkovich) to do an in-depth investigation of Dwayne before he can claim the reward. Meanwhile, an unstable man goes on a rampage to find the parcel he was expecting that was never delivered due to the murder.