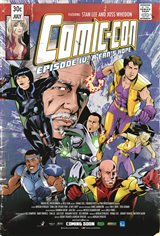 Filmmaker Morgan Spurlock explores the amazing cultural phenomenon of Comic-Con, the event that started as a fringe comic book convention for 500 fans and has grown into a yearly pop culture event that influences every form of entertainment, now attended by over 140,000 strong. He follows the lives of five attendees as they descend upon the ultimate geek mecca at San Diego Comic-Con 2010.