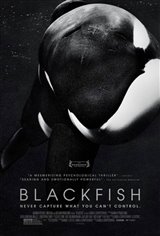 In the summer of 2010, Dawn Brancheau, a renowned SeaWorld trainer, was killed by Tilikum, a 12,000-pound orca. Filmmaker Gabriela Cowperthwaite remembered hearing how this almost never happens because in these parks, the animals are happy and the trainers are safe.

But something wasn’t right. Why would a highly intelligent animal attack its trainer—in effect, bite the hand that feeds it? Cowperthwaite set out to understand this incident.

Thus began a journey of shock and discovery.

Blackfish unravels the story of notorious performing whale Tilikum, who—unlike any orca in the wild—has taken the lives of three trainers while in captivity. So what exactly went wrong?

Shocking, never-before-seen footage and riveting interviews with trainers and experts shows the orca’s extraordinary nature, the cruel treatment of this species in captivity over the last four decades, and the growing disillusionment of workers who were misled and endangered by the highly profitable sea-park industry.