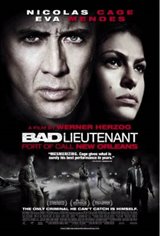 Terence McDonagh (Nicolas Cage), a homicide detective with the New Orleans Police Department, is promoted to Lieutenant after he saves a prisoner from drowning in the immediate aftermath of Hurricane Katrina. However, during his heroic act, he severely injures his back and is put on prescription pain medication.

A year later, Terence—struggling with his addictions to sex, Vicodin and cocaine—finds himself in the battle to bring down drug dealer Big Fate, who is suspected of massacring an entire family of African immigrants.