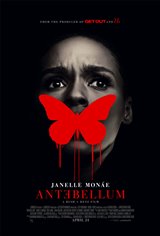 Successful author Veronica Henley (Janelle Monáe) has a wonderful life with her husband and daughter. When she flies to the Deep South for a conference, she suddenly finds herself living a nightmare as she's transported back to the terrifying Antebellum era on a cotton plantation run by cruel Confederate officer Captain Jasper (Jack Huston), who beats and even kills slaves.

Now a slave named Eden, Veronica finds herself trapped in this horrifying new reality and works together with the other slaves to uncover the mind-bending mystery before it’s too late.