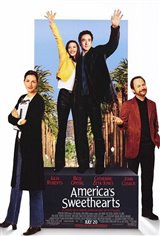 Watch Trailer
After the breakup of two film stars (Cusack, Zeta-Jones), the two are forced to promote the new film they made together. To make matters worse, the film print doesn't show up, and their publicist (Crystal) decides to kill time by announcing that the two have gotten back together again, even though they're both having affairs with other people now.