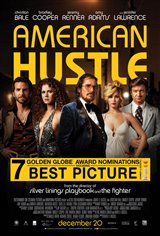 Although Sydney wants to make a run for it, Rosenfeld has an outspoken young wife (Lawrence) who's threatening to take their son away from him and he doesn't want to lose him. DiMaso forces them to join him in taking down Carmine Polito (Jeremy Renner), the charming mayor of New Jersey, but to do so, they enter a world of politicians and mafia that becomes more and more dangerous, the further they go into the set up to the con.