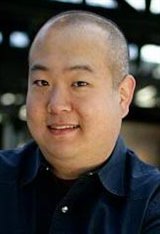 Peter Sohn was born in The Bronx to Korean immigrant parents. After graduating high school, he attended CalArts and interned for the animated feature film The Iron Giant (1999).

When he graduated from CalArts, Peter worked at The Walt Disney Company and Warner Bros. before ending up at Pixar and working in the arts and story department in the creation of Finding Nemo (2003). Since then, he's worked as an animator and story artist for films such as The Incredibles (2004), Ratatouille (2007), and WALL-E (2008). Continuing his work with Pixar,
he wrote and directed the animated film The Good Dinosaur (2015).

His voice acting is often featured in his films, including Emile in Ratatouille (2007), The Pet Collector in The Good Dinosaur (2015), and Ciccio in Luca (2021). In addition, Sohn voiced Sox, a robotic cat, in Lightyear (2022), alongside Chris Evans.

He was the inspiration behind the animation of Russell in Up (2009). The character was based on caricature drawings of Sohn, and he later served as a physical model during the film's production.

Sohn is married to fellow artist Anna Chambers, whom he met while attending CalArts. They live in the Bay Area.