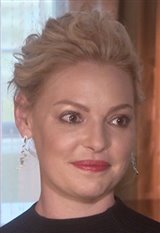 Raised in Connecticut with her two older brothers, Holt and Jason, and older sister Meg, the half-Irish, half-German natural blonde was a child model for Sears catalogs before landing small roles in commercial work.

In 1992 she got her first taste of feature film work at the age of 12 playing a small role in That Night, followed closely by a co-starring role in Stephen Soderberg's critically lauded depression-era drama King of the Hill. Rising quickly, she next landed the starring role opposite Gérard Depardieu in the comedy My Father the Hero (1994).

After playing Steven Seagal's niece in Under Siege 2: Dark Territory, Heigl started to appear on David Letterman and Jay Leno as well as the cover of Seventeen Magazine.

Following graduation from high school, Heigl moved to California to concentrate full-time on acting. She starred in the independent features Prince Valiant, Stand-ins and Wish Upon a Star. In 1998, she joined the cast in the cult-hit, The Bride of Chucky.

In the late '90s, Heigl added television to her resumé, co-starring opposite Peter Fonda in the telefilm The Tempest. A year later she auditioned for all three female leads on the series Roswell before being cast as the beautiful teenage alien, Isabel Evans. She returned to modeling in a minor way thanks to Roswell, posing in print ads as a cross-promotion for Levi's, Roswell's clothing sponsor.

Heigl made a return to films in the new millennium, landing roles in 100 Girls (2000), the horror flick Valentine (2001) and The Ringer (2005). Her fame shot even higher when she received a Golden Globe nomination for her regular role in the hit TV series, Grey's Anatomy. She also shared a 2007 Screen Actors Guild Award with the rest of the cast for "Outstanding Performance by an Ensemble in a Drama Series."

She continued to star in films during hiatus from the series, including the romantic comedy Knocked Up (2007), in which she played an attractive young woman who becomes pregnant after a one night stand. Heigl had her role on Grey's Anatomy minimized so she could concentrate on movie roles in films such as 27 Dresses (2007) and The Ugly Truth (2009), and made her last appearance on the show in 2010, the same year Killers, her romantic action film co-starring Ashton Kutcher, and the romantic comedy Life as We Know It, co-starring Josh Duhamel, were released. In 2011 she appeared in the star-studded cast of New Year's Eve (2011), then starred as the popular Stephanie Plum character in One for the Money (2012), based on the novels written by Janet Evanovich.

Her latest projects include the drama series Doubt (2017), the thriller Unforgettable (2017) with Rosario Dawson and animated comedy The Nut Job 2: Nutty By Nature (2017).

Heigl married singer Josh Kelley in 2007 and in 2009, they adopted a baby girl from Korea.