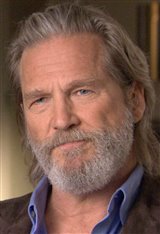 Considered one of the most talented but least rewarded movie stars, the son of actor Lloyd Bridges made his screen debut at the age of four months in the 1950 melodrama The Company She Keeps; his older brother in that film was played by real life older brother Beau. The younger Jeff made a more formal debut before the cameras at age 8, in an episode of his dad's TV series Sea Hunt. He had his first major success at 22 with a leading role in The Last Picture Show (1971), for which he received an... See All