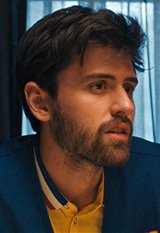 Cooper Raiff is a filmmaker from Dallas, Texas. He studied at Occidental College before dropping out to pursue a career in filmmaking. In his sophomore year of college, he shot a 55-minute film, Madeline & Cooper (2018), and posted it on YouTube. This garnered the attention of producer Jay Duplass, who mentored Raiff as he turned his YouTube film into a feature. Madeline & Cooper was soon reworked into Raiff’s first feature length film, Shithouse (2020). In both films, he played the... See All