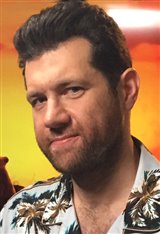 Billy Eichner was born in New York City and grew up in the borough of Queens, later graduating from Stuyvesant High School in 1996. Billy then attended Northwestern University, earning a bachelor’s degree in theater in 2000. His career began in earnest after he gained attention as the host and writer of Creation Nation: A Live Talk Show, a critically acclaimed stage show in New York. He has also appeared as a guest correspondent on the Conan O'Brien late night talk show, and as a host for Funny... See All