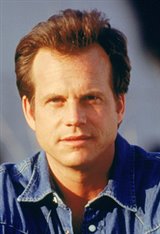 True Lies, Apollo 13, Twister -- you may remember the hit films, but there's a good chance you may not remember the guy who had a role to play in all of them -- Bill Paxton. Often confused for another Bill (Pullman), this Fort Worth, Texas, native is one of Hollywood's best kept secrets. Like many before him, Paxton got his first break in Tinseltown working for B-Movie king Roger Corman where he began as a set dresser before being handed a small role in 1975's Crazy Mama. A bit underwhelmed... See All