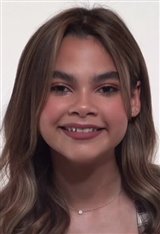 Born in New York City, Ariana Greenblatt is the daughter of actor/producer Shon Greenblat and Solimar Colon Greenblatt. She has a brother Gavin, who is three years older. Ariana made her TV debut at the age of seven with a guest appearance on the Disney Channel series Liv and Maddie: Cali Style. Shortly afterwards, she landed a starring role as Daphne, the youngest (and oddest) member of the Diaz family, on the Disney Channel series Stuck in the Middle, which enjoyed a three-season run from 2016... See All