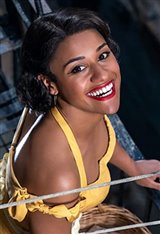 Born in Wilmington, North Carolina and raised in Raleigh, Ariana DeBose trained as a dancer from an early age. She began performing in musicals in high school. She enrolled at Western Carolina University to pursue a musical theatre degree, but left after three months to move to New York. Ariana made her television debut in 2009, when she appeared on the competition show So You Think You Can Dance at age 18. In 2016 she made her TV acting debut with a guest appearance on the CBS crime drama Blue... See All