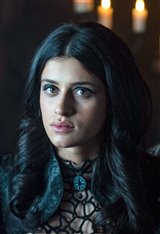 Anya Chalotra is a British actress who is best known for her role as Yennefer of Vengerberg on the popular Netflix original series The Witcher. She's also well-known for her performance in the TV film Wanderlust.

Anya was born in Wolverhampton to a British-Indian family and reared in the South Staffordshire town of Lower Penn. Her father, Madan Chalotra, is of Indian heritage, while her mother, April Chalotra, is British. She has an older sister, Reeya Chalotra, and a younger brother, Arun Chalotra.

In London, Anya began her career as a theatrical performer. She has been in a number of theatre productions, including Notoriously Abused, Great Expectations, Balm in Gilead, The Same Water as Me, The Merchant of Venice, and The Crucible.

Critics appreciated Anya's performance in the play The Village, in which she played a strong-willed Indian adolescent who inspires a group of women to stand up to a harsh and dictatorial policeman.

She made her television debut with the series Wanderlust (2018) as Jennifer Ashman, on BBC One. Anya then portrayed the character of Lily Marbury in The ABC Murders mini-series. However, it was when she was cast as Yennefer on the Netflix fantasy thriller The Witcher in 2019 that she got her big break. The series is based on the works of renowned Polish novelist Andrzej Sapkowski. In 2007, video game makers also produced an action game based on the book series, which helped promote it. Because of the video game's success, fans welcomed the notion of converting The Witcher into a TV series. She also voiced the character of Robin Loxley on the 2019 animated TV series Sherwood.

Anya is skilled in ballet, tap dance, and modern and contemporary dance disciplines. Her interests include reading, shopping, and traveling, with Miami being her favorite destination. She is a skilled singer with a Diploma in Musical Theater from the London College of Music.